Summer Showcase – a night to remember! 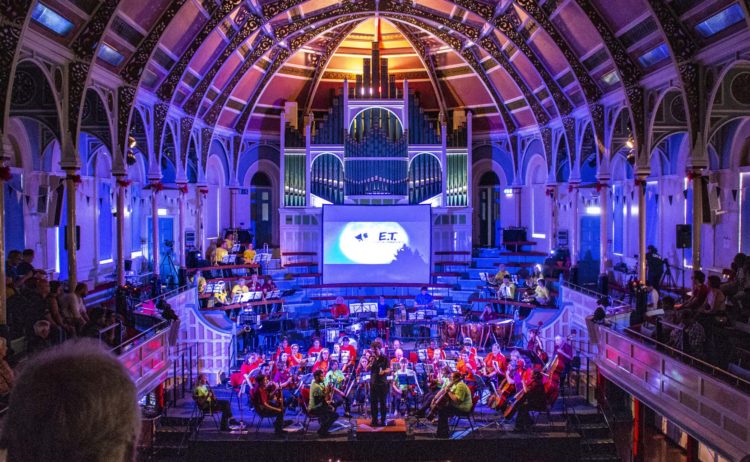 TPO’s Summer Showcase concert was a stand-out success! We’d like to thank the musicians, our volunteers and most of all the audience for making last Saturday a night to remember.

The concert was the culmination of the long-awaited orchestra exchange programme, which saw players from Orchestre Philharmonia Mundi de Montréal (OPMM) join the TPO ranks to share their love for music and performing and gain valuable experience.

In the days leading up to Summer Showcase, the OPMM players were shown around the best attractions in Birmingham and the Black Country – visiting restaurants, bars, museums and even trying their hand at a bit of Ghetto Golf! As the evenings drew in, the players all settled down for a hard few hours rehearsal to perfect every note ready for the big event.

West Bromwich Town Hall was filled with the familiar sea of green, yellow, red and blue dotted with the deep burgundy shirts of the OPMM players. As the lights were dimmed and principal conductor Dan Watson stepped up to the podium, a hush fell upon the audience. After a prompt informative introduction, Dan raised his baton and the orchestra struck up the lively tune of Hoe Down – the concert was off to a flying start.

With an enriched string, bass and percussion section the orchestra sounded better than ever, and the sounds of The Sorcerer’s Apprentice, Doctor Zhivago, The Godfather and Phantom of the Opera rang out through the Town Hall, wowing the audience. Despite having met just seven short days ago, the Canadian and TPO players had built an instant rapport and it was a joy to watch.  With a mainly classical repertoire, OPMM rose to the challenge of film and TV music magnificently and demonstrated true musicianship and talent.

The TPO technical team had been working tirelessly behind the scenes all week to install a new lighting system/show, complete with revolving heads, patterns and different colours which changed according to the songs played. The final result was simply dazzling! Performance and visuals flowed seamlessly and made for a superb audience experience, the hall was packed to capacity (and we quickly sold out of ice creams)!

The entire concert was also livestreamed, so friends and family of the Canadian players and everyone else in the world would watch the concert from wherever they were – here’s the link if you wanted to check it out! https://youtu.be/2iBvqHqOzE4

Despite the setback of an unexpected fire evacuation in the second half, the orchestra remained unfazed and wowed audiences with an even more enthusiastic second half, with the concert coming to a show-stopping finish with Mary Poppins and Dartmoor 1912. As the orchestra issued their final, crisp, on time note, the audience erupted with cheers and tumultuous applause.

Here’s what people said about their week in the West Midlands and their concert experience:

“What a cracking week! Tonight’s concert went extremely well despite an inconvenient interruption in the guise of a fire alarm. However, the show must go on and that extra unintentional interval meant that the orchestras had the gusto to really throw themselves into the second half… and they did. Funky programme, lovely musicians and tight backstage team. It was a pleasure to be involved. Well done to both orchestras. The rest of my Summer won’t be a patch on this”!!

“The performance was great under the leadership of Daniel Watson. I imagine the challenge of melding the creative talents of TPO and Orchestra Philharmonia Mundi De Montreal was a prodigious task.  I had the opportunity to speak to some members of the visiting musicians, they were a delight”.

“I have played in more concerts than I can count. I have played in one of the world’s greatest concert halls, I have played for momentous occasions, and I have played more than my fair share of the most beautiful music ever written. But today, I played the most memorable concert of my life, and it was in West Bromwich Town Hall. With TPO”.