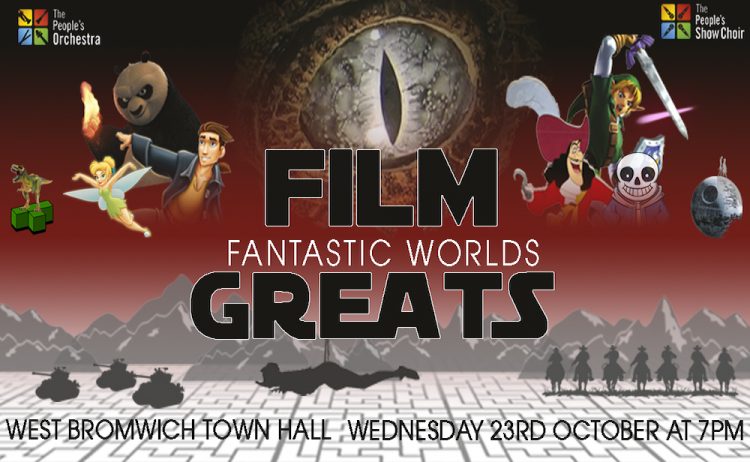 Town Hall, West Bromwich, West Midlands. Wednesday 23rd October – The People’s Orchestra and The People’s Show Choir have announced their upcoming concert via popular demand, Film Greats: Fantastic Worlds, and would love for you to book a seat and enjoy the programme filled with video game music and film scores, including pieces from classics like Magnificent Seven and Star Wars alongside the theme from Tetris, and much more.

You might be thinking to yourself, “Why this concert?” Well, it is not every day you get the chance to enjoy such a diverse film and game music programme performed live with such talented players and a conductor that is on point. The People’s Orchestra are delighted to welcome their new Musical Director David Curtis in this concert, who will be adding his musical flair and years of experience to the orchestra. Did you know that David founded the highly successful Orchestra of the Swan?

The People’s Orchestra is well known for being a ‘high standard, community-based orchestra’ where people have ‘the chance to meet new people and share their love of music’. Members of the orchestra and the recently-launched The People’s Show Choirs enjoy ‘making friends for life’ and having the ‘opportunity to play fantastic music and be part of some unique and exciting projects’. So if you like what you hear, then you can always come and join our ever-growing family too.

This concert is only possible with the on-going support given by the community, with special thanks to our sponsor for this event: Jonathan Lee Recruitment.