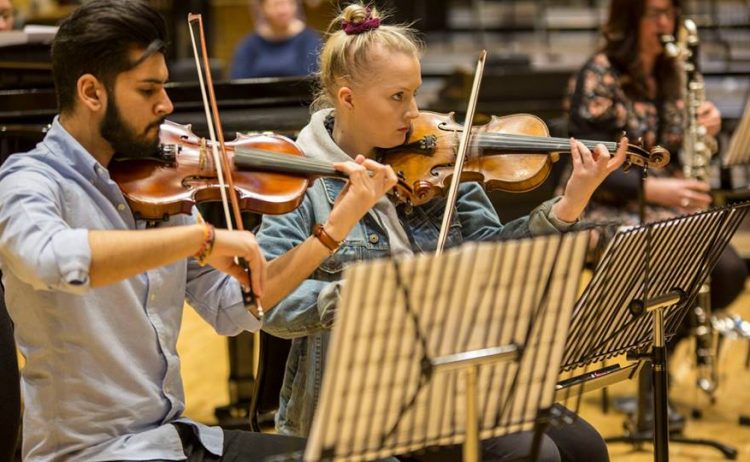 Beatrice moved to Birmingham three years ago for university and didn’t know anyone or have any friends here. She joined The People’s Orchestra as a violinist and reached out to us when she was looking for some work experience as part of her university course seeing as she had none at the time. TPO welcomed her with opened arms and she was able to get some work experience aside from her education.

Beatrice had been a part of an orchestra growing up so when she came to the UK, she wanted to find one that wasn’t too serious for her to dedicate all her time as she had to also concentrate in her studies. Luckily, she stumbled upon TPO and joined because she wanted to carry on playing music and meet new people outside her university.

“I was honoured to have received the award from my university and pleased that all my hard work paid off.”

She was awarded The Brian Travers Award for Academic Achievement 2018 by her University for her high academic achievement for music in her course. Her final year project was a campaign to raise awareness, educate and encourage orchestras to support the charities Anthony Nolan and DKMS. She did this by educating people about what being a stem cell donor is and what the bone marrow register is about, getting people to sign up.

Beatrice was inspired by the predicament that befell her three years ago as she was diagnosed with cancer and needed a bone-marrow transplant to survive. Luckily for her, her brother donated his bone marrow as he was a perfect match. This inspired her because there are so many people who don’t have that chance; a match in their family so she created the campaign to encourage more people to be signed up to the register, so more people can get that lifesaving match.

“I received a lot of guidance and support which helped me create a professional content for my campaign.”

When it came to her final year project, she chose to partner with The People’s orchestra because she knew we would welcome any idea with open arms. She was given the guidance and support she needed, her campaign reached loads of continents and she was fortunate enough to have 10 orchestras support it and she was able to sign seventy-one new people to the stem cell register. Her campaign scored her a 92% pass and a first-class honours degree in her course.